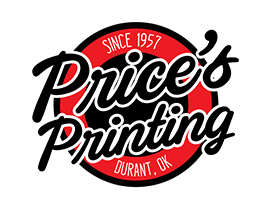 Price's Printing was founded March 1, 1957 by Lawrence and Ruby Price, when they bought the commercial printing part of the Durant Printing Co. (Durant Daily Democrat) from Bennett Story and R.F. Story.  It has been a family-owned business since its inception.  The business originally operated in the building located at 317 West Cedar in Durant, just across the street from the current location of the building.  Mr. and Mrs. Price sold the business to Bobby and Patricia Hatcher and Virgil and Ruby Jo Parker, December 1, 1976.  They operated the business at the West Cedar location until moving it across the street to its current location in 1982.  The Hatcher's continued to operate the business after the deaths of the Parkers in 1999 and 2001.  The North 3rd location had formerly been Sanford-Pool Funeral Home and later a church.

Current owners Chris and Shelley Allen became the third owners of the business on January 1, 2004.  We strive to treat our customers with the respect they deserve...still offering old-fashioned customer service while using today's technology!!